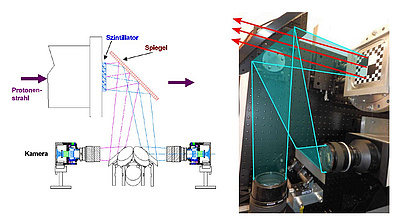 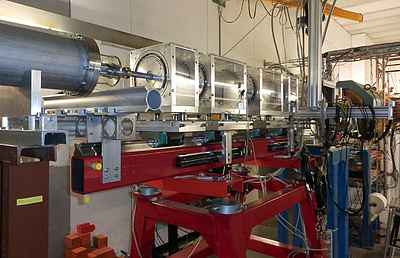 Construction and test of the PRIOR proton microscope

Abstract
The study of High Energy Density Matter (HEDM) in the laboratory makes great demands on the diagnostics because these states can unsually only be created for a short time and usual diagnostic techniques with visible light or X–rays come to their limit because of the high density.
The high energy proton radiography technique that was developed in the 1990s at the Los Alamos National Laboratory is a very promising possibility to overcome those limits so that one can measure the density of HEDM with high spatial and time resolution.

For this purpose the proton microscope PRIOR (Proton Radiography for FAIR) was set up at GSI, which not only reprocudes the image, but also magnifies it by a factor of 4.2 and thereby penetrates matter with a density up to 20 g/cm2. Straightaway a spatial resolution of less than 30 μm and a time resolution on the nanosecond scale was achieved.

This work describes details to the principle, design and construction of the proton microscope as well as first meeasurements and simulations of essential components like magnetic lenses, a collimator and a scintillator screen. For the latter one it was possible to show that plastic scintillators can be used as converter as an alternative to the slower but more radiation resistant crystals, so that it is possible to reach a time resolution of 10 ns.

Moreover the characteristics were investigated for the system at the commissioning in April 2014. Also the changes in the magnetic field due to radiation damage were studied. Besides that an overview about future applications is given. First experiments with Warm Dense Matter created by using a Pulsed Power Setup have already been performed. Furthermore the promising concept of combining proton radiography with particle therapy has been investigated in context of the PaNTERA project.

An outlook on the possibilities with future experiments at the FAIR accelerator facility is given as well. Because of higher beam intensity an energy one can expect even better spatial and time resolution. Particularly the examination focuses on the question if experiments with LAPLAS– like targets (Laboratory for Planetary Science) can be studied with proton radiography. From those it is possile to gain data with PRIOR about the equation of state of matter as it exists in the interior of giant gas planets.